FFTA Clan Abilities Manager for mIRC
This script was designed to allow people playing FFTA to keep track of what abilities their clan members have mastered.
Reason for making: Boredom and wanting to track abilities easily.
NOTE: Script for mIRC 6.x ONLY! (Might also work with mIRC 7.x.) Not guaranteed to work with other versions of mIRC. 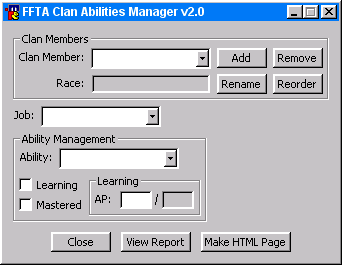 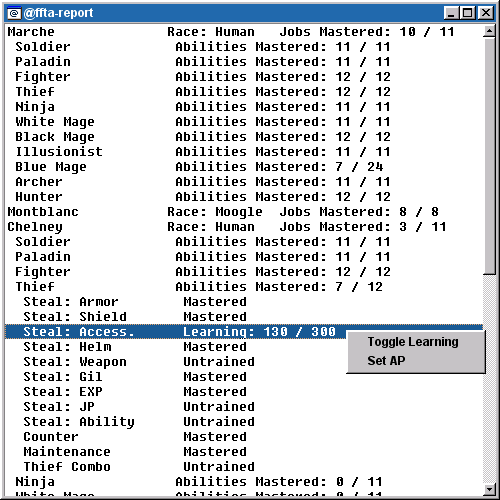 Instructions on setup and use:
1)
Setup: First, if you are using a previous version of the script, type "/unload -rs ffta.mrc" without the quotes into any mIRC window.
Once you have done that (or if this is the first time you are using the script), download the zip file and unzip it in your mIRC directory.
Then type "/load -rs ffta.mrc" without the quotes into any mIRC window.
When the 'Script Warning' window comes up, click Yes. Note that this script does not do anything when loaded except give out my contact information. :)
2)
Once loaded, type "/ffta" without the quotes in any mIRC window.
The will open the dialog box, where you can start entering information in.
Alternatively, you could also right-click in any window (or go to your command menu option) and go to the 'FFTA' option and pick 'FFTA Clan Abilities Manager'.
3)
Basic usage is as follows: First, you need to add your clan members.
NOTE: Once you add Marche to the clan list, he can not be removed.
Once you have done that, you can start selecting which abilites are mastered or being learned.
4)
The Report window can be opened one of 3 ways. First would be from inside the FFTA Clan Abilities Manager dialog window. Next would be using "/fftareport" without the quotes in any mIRC window. Lastly would be from the 'FFTA' pop-up option, the 'FFTA Clan Abilities Report' option.
When using the Report window, you can right-click on a clan member or a job.
When doing so, you get the option to expand/shrink the list. You will also be able to jump to the selected line inside of the dialog box, if it's open.
When selecting an ability, you can also change the settings of that ability, same as if you were inside the dialog box.
When you make any changes in the dialog while this Report window is open, the Report window will automatically be updated. Same goes for any changes inside the report window, they will be updated in the dialog box, if opened.
5)
Clicking the 'Make HTML Page' button will generate a web page that will show all the information the report window would show when fully expanded.
This could be useful if you wish to upload the page to your own web space and show other people.
It also includes Javascript, so if the person viewing the page doesn't have Javascript support, they will be unable to view the page.

EXAMPLES -- Style 1 & Style 2 -- These are examples of what will be generated.
NOTE: Style 2, using tables, can be about twice the size of Style 1, using lists. What style you pick is up to you.


Download Script
FFTA Clan Abilities Manager v2.2
File is zipped, be sure to unzip it to the mIRC directory.
Downloaded 3366 times